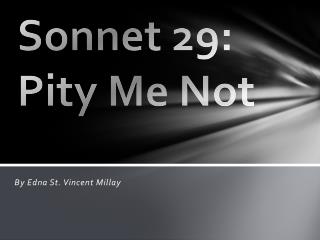 Unit 6- Poetry - . english ii world literature. types of poems. the sonnet the acrostic the ode the riddle poem the

Sonnet Text Work - . by larry gleason. sonnet xxix -- 29. when in disgrace with fortune and men's eyes, i all alone

William Shakespeare - . 1564-1616 stratford-on-avon - england. who was he? why is he so famous? life works tragedy comedy

English Sonnet - . the prologue to act 1 of romeo and juliet is written in the form of an english sonnet . what does