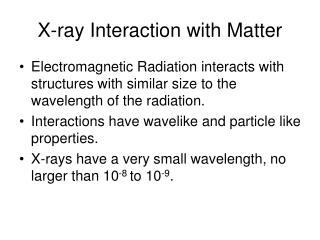 X-ray Interaction with Matter. Electromagnetic Radiation interacts with structures with similar size to the wavelength of the radiation. Interactions have wavelike and particle like properties. X-rays have a very small wavelength, no larger than 10 -8 to 10 -9 . .

Matter - . chemical substances are composed of matter matter is the physical material of the universe; anything with mass

Properties of Matter - . matter. matter is anything that has mass and takes up space . see excerpt from bill bryson

What’s the MATTER Classify Matter - . matter, classify matter at the conclusion of our time together, you

What’s the MATTER Classify Matter - . matter, classify matter at the conclusion of our time together, you

Chemistry : Introduction to Matter - . 1.1 describing matter. anything that has mass and takes up space. hold up

Matter and Energy - Aim: what is matter? do now: what is the difference between a heterogeneous and homogeneous mixture?

Structure of Matter - . analyze what makes up matter compare the different models of an atom. structure of matter. mass.

Matter 4/3 - . matter. i. matter a. matter is what the universe is made out of (atoms) b. matter is anything that has

Classification of Matter - . matter. matter: anything that has mass and volume. 3 phases of matter. the nature of matter.