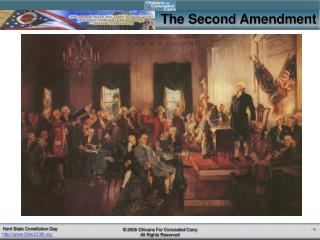 GOVT 2301 - . the freedom to peacefully assemble and to petition government for a redress of grievances and interests

BCC ESL Program US Culture Contest Part 2 - . in what month is the president inaugurated ? january. which state was sold

Goal 9 - . flappers. young women who embraced the new fasions and urban attitude of the day. they rebelled against the

Prohibition - . the 18 th amendment went into effect in january of 1920, banning all alcoholic beverages. many believed

WebDFS - . budget amendment and personnel processing. webdfs. what is it? web-based system for preparing and routing

The Lautenberg Amendment - Domestic violence is incompatible with military service . overview. the gun control act of

Cruel and Unusual Punishment - . “excessive bail shall not be required, nor excessive fines imposed, nor cruel and

Freedom of Religion - . history of the amendment defining ‘religion’ the establishment clause the free exercise