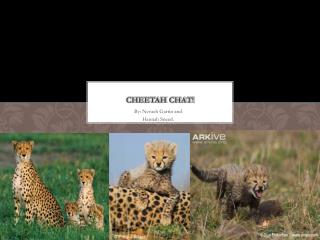 CHEETAH CHAT!. By: Nevaeh Gartin and Hannah Sneed. Life SPAN and habitat. Life span – 12 to 14 years in the wild and 17- 20 in captivity. Habitat- eastern and south western Africa. In grasslands and desserts. They sometimes take shelter in a fallen tree or use it as a hiding place. Welcome to the ATIA Webinar Room - . we will be starting shortly. please check in using the public chat feature. type

Building Oral Language into the Basal, and Beyond Research Findings and Promising Practices - . diane august center for

Start it - . welcome! listen… to the mc &amp; other leaders learn… the lesson of the day love… others in the

WELCOME To - . transition iep: what’s new and a little review. what you need to get started for the presentation. you

Welcome to the class! - . please write your full name in the chat box!. leaving a perfect massage. introductions. eo -