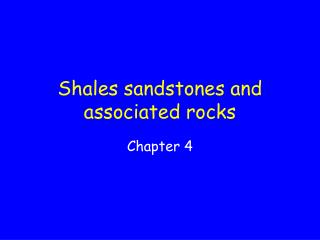 Shales sandstones and associated rocks. Chapter 4. Pyroclastic versus Epiclastic. Clast – a particle, or grain Epiclastic rocks are those composed of (nonvolcanic) particles of all sizes, clay to boulders Pyro – fire, volcanic Oil Shales - . mitchell page &amp; jared pullen. intermittency. it is available as long as the deposits are able to

Geothermal and Oil Shales and Sands - . the great energy debate by: elizabeth hart and erica butts. what is geothermal

Rocks and Minerals - . study guide. what are minerals?. there are 5 things that characterize minerals. inorganic solid

Rocks and Minerals - Science background. mineral resources can be metallic or nonmetallic.metallic minerals that can be