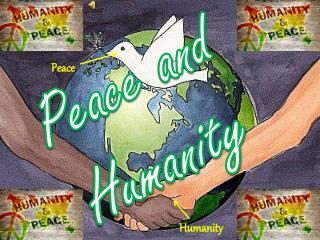 Peace. Peace and Humanity. Humanity. Peace. What is it?. Peace is a State of harmony. It is characterised by non-violence. It is the freedom of fear from violence. Love and Humanity - . video: silence of love. what happen in the video? what can you learn from this video?. video:

World Peace Quotes to Give You Hope for Humanity - Subscribe today! unlimited access to the greatest historical classics.

Humanity - . how should you see yourself and others? how does god see you and others?. 4 views of human origin .

Jesus’ Humanity - Rsv. jesus’ humanity. and jesus increased in wisdom and in stature, and in favor with god and man.

Celebrating Humanity - . the english renaissance 1485-1625 senior english. renaissance began in italy between 1350 and

Advantage - Humanity - Http://abrams360media.com/ the article is about humanities fight against covid-19. the politics

Celebrating Humanity - Unit 2 – the english renaissance. celebrating humanity. “what a piece of work is a man! how

War and Peace - . bargaining and war. the puzzle. war is an extremely costly way for states to settle their disputes.

War and Peace - . americaâ€™s role in the world and how it affects us at home. the patriot