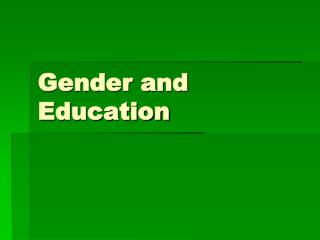 How Easy The Gender Prediction Is - Intelligender’s gender prediction test is an affordable, simple-to-use urine test

The GENDER-CONSIOUS Self - . or the gender-conflict self (the early feminist outcry). charlotte perkins gilman. “the

Social Problems: Sexism and Gender Inequality - . gender inequality as a social problem. sexism : the subordination of

AIMS OF SSA - . to provide useful and relevant elementary education for all children in the 6 to 14 age group by 2010. to

How education can help achieve gender equality in the creative department - . dr. alejandra hernández university of

Gender and education - . a historical overview of women and men in education. gender, education and power. why education