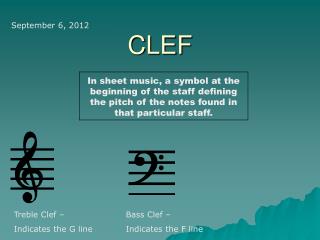 TREBLE CLEF - . the treble clef is also known as the “g” clef because it starts on the g note . filling. e. evil

Treble Clef - . by n adira. the acronyms for the “g” clef are every girl bakes delicious fudge, fair and clean

Bass clef - . green busses drive fast always all cows eat grass. the bass clef is also called the f clef this is why. the

Reading Bass Clef - . staff. music is written on a staff. a staff is a set of five lines. the plural form of staff is

The Treble Clef and Bass Clef Staff Notes - . learning the notes on the staff will prepare you for playing an instrument.

CLEF 2007 Proceedings - . to be published in springer lncs (hopefully!) deadline for submission of papers: 20 november