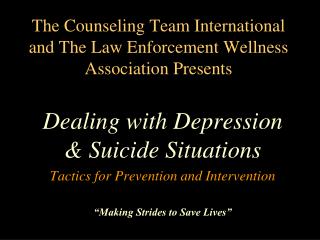 The Counseling Team International and The Law Enforcement Wellness Association Presents. Dealing with Depression & Suicide Situations Tactics for Prevention and Intervention “Making Strides to Save Lives”. Suicide. A permanent solution to a temporary situation…. The Police And Law Enforcement - . police. the police are gatekeepers of the cj process. what does that mean?. police.

The California Faculty Association presents… - . george diehr stand up to the pension privatization gamble. what is