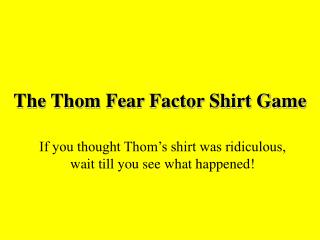 The Thom Fear Factor Shirt Game. If you thought Thom’s shirt was ridiculous, wait till you see what happened!. The Shirt. I think Thom could squeeze in two more pockets on his shirt. The Conception FEAR FACTOR - . life greatest problem = fear. it robs us of happiness it causes us to settle for less than we are capable

THE FACTOR GAME!! - . before we play make an entry in your math journal titled the factor game , then turn to page one in

A game of Dark and Fear - . by octavian george mirea and bianca

“The Fear” - . write down your homework: vocabulary word #1 – from today’s poem. free writing. take 10 minutes to