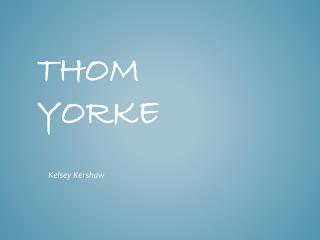 Thom Yorke. Kelsey Kershaw. Cited as one of the most influential figures in the music industry, and named by Q magazine, the 6 th most powerful names in music. . Birth. Thom was born October, 7 th , 1968 in Wellingborough , Northamtonshire . Influences / Early Life. John 7 Rod Thom - . “who do you say i am?”. http://olivetreemedia.com.au/the-apologetics-series.aspx. “who do you

My Sad Captains By Thom Gunn - One by one they appear in the darkness: a few friends, and a few with historical names.