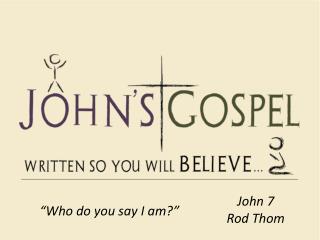 Case 7: John - . patient history. john is a 64-year old retired school teacher. you recently sent him to see his

John, chapter 7 - . niv john 7:1 after this, jesus went around in galilee, purposely staying away from judea because the

John, chapter 7 - . niv john 7:1 after this, jesus went around in galilee, purposely staying away from judea because the

John 7-12 - . feast of tabernacles. john 7:2 this feast was the start of the last six months of the savior’s life.

John 7:38 - He who believes in me, as the scripture has said, out of his heart will flow rivers of living water.”. john

King John - . “ bad”. king john was born in 1166 he was called john lackland because he lost most of his lands in