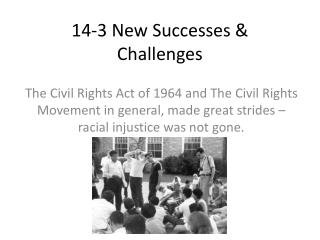 14-3 New Successes & Challenges. The Civil Rights Act of 1964 and The Civil Rights Movement in general, made great strides –racial injustice was not gone. Push for Voting Rights. Freedom Summer 1,000 volunteers attempt to get blacks in Mississippi to register to vote. Researchers' Challenges and Dilemma - This is the daily challenges which the researchers are facing. are they being

Present Challenges and Future Directions for the Field of Learning Disabilities* - . margo a. mastropieri * paper

Gameplay - Or, where the fun comes from. gameplay. what is gameplay?. defined as consisting of the challenges and actions

The Jungle by Upton Sinclair - . quick-write (7 min). reflect on your experience taking the ghsgt. what were your…