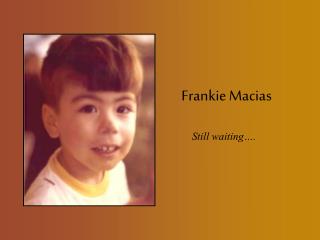 Frankie Macias. Still waiting…. Frankie Macias was born in 1967, in California. He was his mother Kathy’s first child. A few years later Frankie welcomed a loving baby sister to his little family. Frankie was a shy, kind, and gentle child who also happened to have a developmental disability. Christopher Macias - . japanese whaling period 9. when did it start?. it has begun in the early 12 th century. japan was

STEVE MACIAS - . music defines me because most of the songs i listen to tell a story that kids like me can relate to.

Irania Macias Patterson - . irania is a multicultural children specialist and library consultant in the area of

FRANKIE PICKLE and the pinerun3000 - . written and illustrated by: eric wight. that’s me. summary. this book is about a