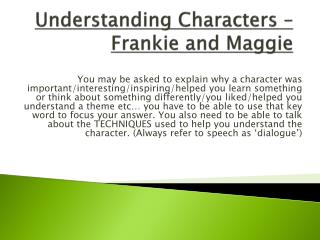 A Tragedy! - Understanding the tragic elements of macbeth . a tragedy!. common understanding. there is one simple (and

These are the Simpsons. - These are the simpsons. lisa. marge. bart. homer. maggie. they are homer and marge. their

We Are Marshall - . fact vs. fiction. characters. the characters of annie cantrell and paul griffen were not real people.

Understanding Tragedy - . background for antigone by sophocles. tragedy. a play depicting serious and important events in

Frankie Macias - . still waiting…. frankie macias was born in 1967, in california. he was his mother kathy’s first

What Are Characters? Qualities Count Characters in Conflict Practice - Characters: the actors in a story. feature menu.