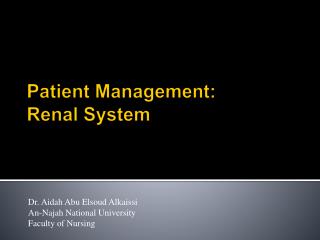 Renal system - . learning objectives. to outline the renal system; to describe the structure and function of

Renal Association Patient Safety Project - Background . 10% of patients in hospital experience suffer from some type of

The Mental Health Care Patient Management System - . the mhcpms. this system (not its real name but a real system) is a