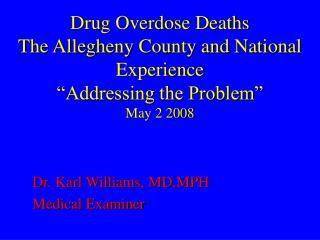 Drug Overdose Deaths The Allegheny County and National Experience “Addressing the Problem” May 2 2008. Dr. Karl Williams, MD,MPH Medical Examiner. Leading Cause of Death in the US. Methodology. Mortality counts are based on death certificate information only. CHOICE OF ANTIEPILEPTIC DRUG - . magnitude of the problem. epilepsy affects: approximately 1 in 50 children and 1 in 100

Enhancing Safety through a Drug-Free Workplace - . statistics &amp; costs. the scope of the problem. substance use is

Pamela Oliver Presentation to Governor’s Commission May 22 2007 - . the scope of the problem &amp; how to measure

Enhancing Safety through a Drug-Free Workplace - . statistics &amp; costs. the scope of the problem. substance use is

DIFFUSION STUDIES IN TANSDERMAL DRUG DELIVERY SYSTEM - . diffusion. movement of molecules from an area of high

68000 Addressing Modes - . addressing modes are concerned with the way data is accessed addressing can be by actual

Drug and Therapeutics Committees - . drug use evaluation (due). objectives. understand the mechanism for implementing and