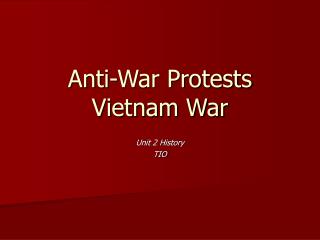 Vietnam War Protest Music - . “fortunate son” - ccr. some folks are born made to wave the flag, ooh, they're red,

The anti-war movement and Getting OUT - . aka, why did americans hate the vietnam war so much?. anti-war demonstrations.

How did protests against the Vietnam War develop? - . lesson objectives. to identify the different ways that people

The Vietnam War - . vietnam: my q’s. how did the domino theory motivate america to become involved in vietnam? what was

Vietnam War Protest Music - . protest music. during the war, many artists protested vietnam by singing for peace and

End of the Vietnam War - . timeline. read “president nixon and vietnamization ,” “trouble continues on the home

Anti-War Movement - . by amber ullman and courtney reigert. over

The ‘Vietnam War’ - . or the american war in vietnam. where is vietnam. a little bit of history french colony

Protesting the Vietnam War - . u.s. history. background. unlike wwii, a large percentage of americans did not support the