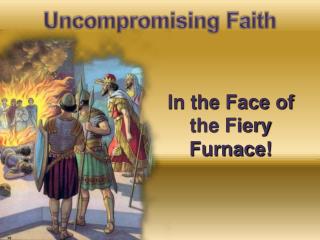 Uncompromising Faith. In the Face of the Fiery Furnace!. Daniel 3:1. “Nebuchadnezzar the king made an image of gold, whose height was sixty cubits and its width six cubits. He set it up in the plain of Dura, in the province of Babylon.”. The Image. Dimensions 90 feet high 9 feet in breadth Uncompromising Faith - . in the face of the fiery furnace!. uncompromising faith. daniel, shadrach, meshach, and

Uncompromising Commitment Acts 14:1-22 - . commit yourself to the gospel whatever the response. we will proclaim the

Faith - . stigmata. prophecy. “yea, dogs are ‘round about me; a company of evildoers encircle me; they have pierced

Faith - . why believe?. hebrews 11. 6 and without faith it is impossible to please him, for he who comes to god must

Faith - . trusts. god. its an anchor for the soul its evidence of things unseen god can be trusted. the power of. by

Faith - . (customize for your parish here). introduction: the context of marriage today. marriage – a wonderful gift

Faith - . www.kevinhinckley.com. cloudy days in tomorrowland. michael wilcox, pyramid of faith. heb 8:6; 9:11 what do we