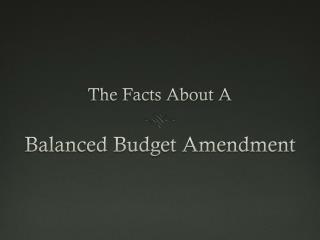 A Balanced Budget Amendment - . wwsd?: what would a squirrel do?. ideally, fiscal policy would be conducted by a

Analyzing the Case for a Balanced Budget Amendment to the U.S. Constitution - . marina azzimonti university of texas

Balanced! - . it is impossible to be a growing follower of christ and continually mishandle your finances . laws of

First Amendment - . are you an absolutist or a relativist?. nat hentoff: absolutist. northeastern graduate wrote liner