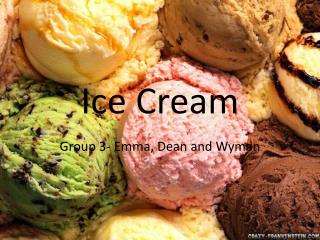 Ice Cream. Group 3- Emma, Dean and Wyman. What is ice cream?. Ice cream is a frozen dairy product that comes in a wide range of flavours and colours. It’s used as a dessert, and to accompany things like pie and cake. This frozen product is enjoyed all over the world, but more so in America. Ice Cream - . ice cream and phase change. we are going to start with a liquid and change it to a solid . what is this

Ice Cream - . by: caitlyn gosa yum! yum!. hi! here you will learn all about ice cream. who made ice cream. the roman

Ice Cream - . sweet summer treat. history. mesopotamia has the earliest icehouses in existence, 4,000 years ago, beside

Ice Cream - . ice cream is a sweet desert. it is usually made of milk, cream and sugar. adding fruits makes it really

Ice Cream - . ice cream is a sweet desert. it is usually made of milk, cream and sugar. adding fruits makes it really

ICE CREAM - . objective: students should be able to describe the various ice creams based on colour, size, flavour and so

Ice Cream - . by thalia hawkins. table of contents. description history places in the world people have it. introduction.

ICE CREAM - . technically, ice cream may be defined as the partly frozen foam with an air content of 40%-50% air by