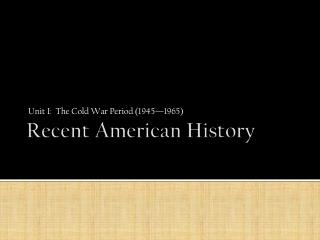 Unit I: The Cold War Period (1945—1965) . Recent American History . Origins of the Cold War. What should I be able to do? . Define the Cold War Explain the reasons behind why the U.S. and the USSR were fighting during the years of 1945-1991 and explain how each country fought the war Recent American History - . unit ii: post-war america, the new frontier and the great society. what should i be able to

Recent U.S. History - . an american flag is framed by the wreckage of the world trade center in new york city shortly

Recent Sikh History - . [insert date]. in the peaceful quest for indian independence, of all the people hanged, exiled

RECENT HISTORY - 1 - . 1993: present salisbury college formed from merger of college of art and college of technology

Hmong Recent History - . at the beginning of the 19 th century, half a million hmong migrated from china to indochina.

American History - . how do we start this country?. tell me;. have you always succeeded in every thing you have ever

American History - . unit 7 prologue to the american civil war. the civil war an introduction. during the 1800’s,

American history - . by: “the saltines”. introduction. the high tide of the progressive era occurred during the

American History - . chapter 5.2 the age of jackson. missouri compromise. the union had 11 free states and 11 slave