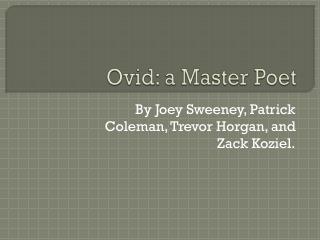 Ovid: a M aster Poet. By Joey Sweeney, Patrick Coleman, Trevor Horgan, and Zack Koziel. Introduction. Born in 43 BCE, Died in 17-18 CE Wrote a number of famous works, like the Metamorphoses, from which we get most of our information about the Greco-Roman religion.