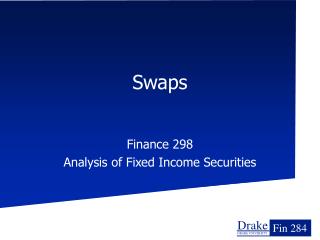 Swaps. Finance 298 Analysis of Fixed Income Securities. Introduction. An agreement between two parties to exchange cash flows in the future. The agreement specifies the dates that the cash flows are to be paid and the way that they are to be calculated. SWAPS - . types and valuation. interest rate and currency swaps . definition a swap is a contract between two parties to

SWAPS - . the short-term currency swap an

Swaps - . swaps. a swap is a contract calling for an exchange of payments over time. almost anything can be swapped these

Chapter7 Swaps - . nature of swaps a swap is an agreement to exchange cash flows at specified future times according to

Swaps - . transform assets or liabilities by “swapping” cash flows with another party allows a party with a

Swaps - . nature of swaps. a swap is an agreement to exchange cash flows at specified future times according to certain

SWAPS 2 - . decomposition &amp; combination. currency swaps. the legs of the swap are denominated in different