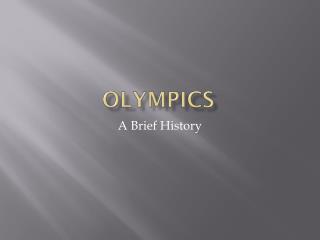 OLYMPICS. A Brief History. When and where were the First Olympics?. In 776 B.C. the first Olympics were held in Europe at Olympia, Greece. Olympia was a sanctuary dedicated in honor of Zeus, the father of all Greek Gods and Goddesses. The games were part of a religious festival.

Planetary Olympics - The wonderers present:. planetary olympics. to start…. introduction: the need for innovation the

Olympics - . by sophie beck. who has won 2 gold’s for great b ritain in running?. mo farrah ellie simmons.

Math Olympics - . history how to plan a competition v ideo of actual competition participate in a couple of rounds

The Olympics. - The olympics. by: mayson robert morris.

1924 olympics - . number of olympic committees jumped from 29 to 44 over 1,000 journalists covered the event which ran