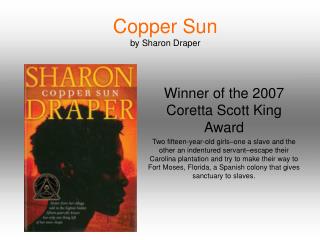 Copper Sun by Sharon Draper. Winner of the 2007 Coretta Scott King Award Two fifteen-year-old girls–one a slave and the other an indentured servant–escape their Carolina plantation and try to make their way to Fort Moses, Florida, a Spanish colony that gives sanctuary to slaves. Sharon M. Draper - . author and educator. tears of a tiger (simon and schuster, 1994) forged by fire (simon and

Copper Sun - . by sharon draper. what is africa to me: copper sun or scarlet sea, jungle star or jungle track, strong

Copper Sun - . test review . characters. amari - 15 year old girl from the ewe tribe. she is captured and made a slave

Author Study of Sharon Drapper including: Tears of a Tiger Forged by Fire Copper Sun - . paula hunt ya literature frms

Presented by Dr. John Draper - Father and grandfather were methodist ministersmiddle son is a junior in college . . . .

Presented by Dr. John Draper - . grandson, son . . . mother and grandmothers were teachers, mom was an assistant