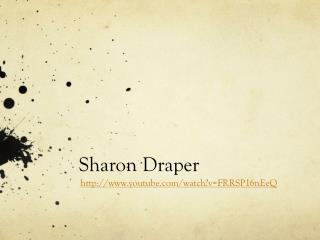 Sharon M. Draper - . author and educator. tears of a tiger (simon and schuster, 1994) forged by fire (simon and

Bob Draper - . environmental health housing specialist. ‘who cares about the roof provided there is food on the table

Pediatric Dentists Draper - In draper, utah south mountain dental is one of the most trusted dentists, dr. johnson have