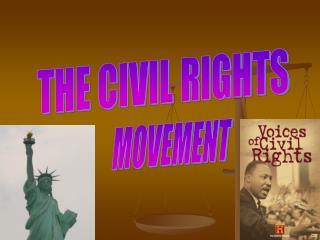 THE CIVIL RIGHTS. MOVEMENT. OBJECTIVES. The causes and the effects of the Civil Rights Movement Examine the major campaigns during that Era Examine and evaluate some of the Government policies implemented Compare the issues impacting the nation then and now. Stage 1.

The Civil Rights - . famous people that took part in this risky battle for freedom. apparently, they will soon soar high.

CIVIL RIGHTS - . purpose:. all local agencies must comply with usda regulations on nondiscrimination and the following

Civil Rights - . what rights are worth fighting for?. taking on segregation. main idea activism and a series of supreme

Civil Rights - . match these words to their definitions. 1. civil rights *judging before knowing 2.

Civil Rights - . give to every human being every right that you claim for yourself .- robert ingersoll. civil liberties

CIVIL RIGHTS - . what are civil rights?. civil rights refers to the positive acts governments take to protect against