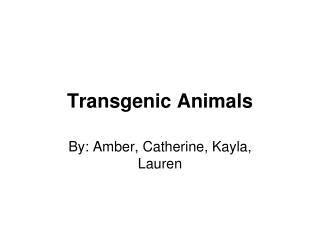 Making Transgenic Plants and Animals - Genetic engineering of plants. must get dna:into the cellsintegrated into the

Transgenic Animals: The Benefits for our Future - Overview. what are transgenic animals?what are the uses of transgenic

Transgenic - . transgenic: an organism that has had dna introduced into one or more of its cells artificially

TRANSGENIC - . animals &amp; plants. q: what are they?. a: animals or plants who have had the dna of other plants or