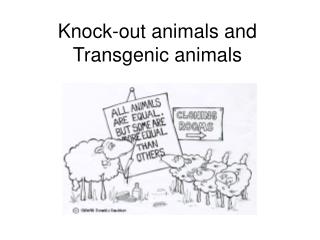 Knock-out animals and Transgenic animals. ES cells. Embryonic stem (ES) cells. Pluripotent stem cells derived from the inner cell mass of the blastocyst. Can be cultured, manipulated and then reinjected into blastocysts, where they can go on to contribute to all parts of embryo. Making Transgenic Plants and Animals - Genetic engineering of plants. must get dna:into the cellsintegrated into the

Transgenic Animals: The Benefits for our Future - Overview. what are transgenic animals?what are the uses of transgenic

ANIMALS - By: christian with a little help from mom weddel seals weddel seals have 34 different calls. they can be heard

Animals - . what is an animal? . multicellular heterotrophs carnivores, herbivores, or omnivores some are vertebrates,