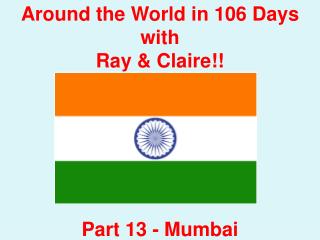 Around the World in 106 Days with Ray & Claire!! Part 13 - Mumbai. Bombay was first settled by a community of Koli fisher folk who lived on the seven islands during the 2nd Century BC Part 1: The End of the Cold War, Desert Storm, and the New World Order Part 2: Islamic Resurgence and Global Terrorism

PART 4 - . quantitative research methodologies. to behold is to look beyond the fact; to observe, to go beyond the

The Economic Crisis: Towards a New World Order? Towards Sustainable Growth? - . mumbai joseph e. stiglitz may 26, 2010.

WORLD POPULATION - . as told by dr. f. elwell. world population. in the six seconds it takes you to read this sentence,

Claire Lucas - . investigation of the oxidation of organic films on cloud droplets funded by the natural environment