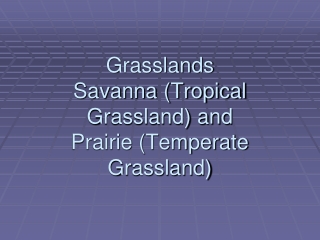 Grasslands Savanna (Tropical Grassland) and Prairie (Temperate Grassland). PRAIRIE. A. Location-North America. The middle of North America 1. The prairies are a type of grassland dominated by herbaceous plants and grasses. The Grassland Biome - . a sarah feinman presentation. which of these is a grassland?. b. a. c. d. they all are

Temperate Grassland Biome - . by bria taylor period 1 october 7, 2011. location. this biome is located on every continent

Grassland Biome - . by: sofie allain. environment. the grasslands can be referred to as the prairies, steppes, pampas,

Grasslands - . tim martinsuydan . temperature - temperatures vary based on the location of the grassland. for example,

World Biomes - . highlight words you might not be familiar with. world biomes &amp; ecosystems. tropical rainforest