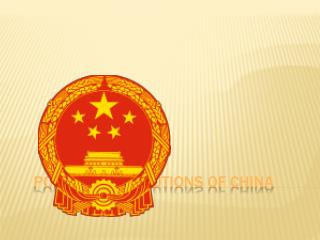 Political Institutions of China. Elections designed to give the party-state greater legitimacy Party controls elections to prevent dissent Direct, secret-ballot elections at local level Found most common at the village level (could be a façade) Indirect elections at other levels . ELECTIONS .

I. The Political and Economic Structure of the PRC economy 1. one-party rule by the CCP - Lecture 1: an overview of the

Iran: Political Institutions - . lenny dong. one man above all others the supreme leader. single handedly the most

Russian Political Institutions - . federalism. although the soviet union was highly centralized, it had a federal