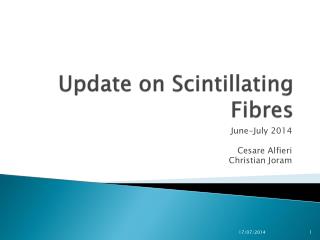 Fibres - . two kinds. natural fibres that come from nature- plants and animals (although they are usually cultivated).

Fibres - . all fabrics are made from tiny hair like structures called fibres. they are either staple(short) or filament

Fibres - . lesson objective – to be able to identify common and synthetic fibres. questions. do you know what a fibre

Muscle Fibres - . learning outcomes all are able to apply knowledge of the fibres to sporting events most are able to

Fibres Fabrics - . how do we make fabrics?. some fibres can be used directly to make fabrics ( eg felting) most fibres

The Scintillating Syllabus - . what does best practice research tell us about how to construct effective syllabi?.