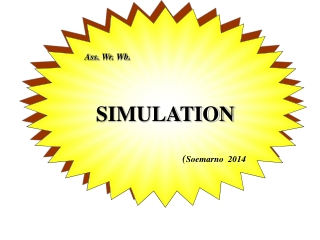 Ass. Wr . Wb . SIMULATION ( Soemarno 2014. Simulation A simulation is an imitation of some real thing, state of affairs, or process. The act of simulating something generally entails representing certain key characteristics or behaviours of a selected physical or abstract system. Large Eddy Simulation - In the name of god. large eddy simulation. by reza barati under guidance of prof. g. heidarinejad

The worksheet for the simulation will be in the student’s booklets. - Simulation of “blackbody” is in phet. the