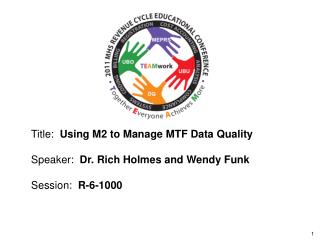 session title here - . add speaker names here. track name - date - &amp; anything else you need to include that maybe

The IT FUNK program 2007-2012 - . research, development and innovation into information and communication technology for

What is Quality Management in layman’s language? - . overview of talk. what is quality? what is there in existence to

Created by Wendy Taylor - Vocabulary instruction. created by wendy taylor. some information of about vocabulary i