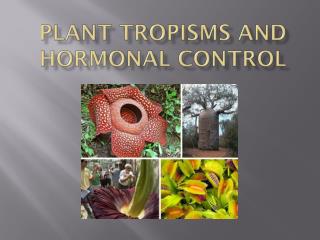 Plant Tropisms and Hormonal Control. Environmental Cues. Plants depend on their immediate environment for the materials and energy they require for survival. Plants are relatively tolerant of environmental changes from which they cannot escape. Hormonal Control of Mammogenesis and Lactogenesis

Plant Tropisms - . tropism. is a biological phenomenon, indicating growth or turning movement of a plant in response to

Plant Tropisms! - . student expectation (se) 10b – describe the interactions that occur among systems that perform the

Plant Tropisms - . what are we talking about?. tropism - directional growth of a plant, or part of a plant, in response