The Parts List of a Virus - PowerPoint PPT Presentation 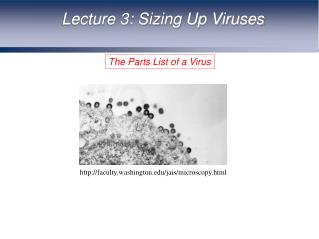 Lecture 3: Sizing Up Viruses. The Parts List of a Virus. http://faculty.washington.edu/jais/microscopy.html. Cells and the Viruses That Infect Them. Bacteria. +phage.

Types of Microbes 1 - . viruses. what is a virus?. a tiny, non-living particle that enters and then reproduces inside a

A.Viruses - . are viruses living or non-living?.  viruses are not living  they have some properties of life but not

Transmission of Viruses - . introduction vocabulary routes of transmission some examples “biology” of viruses.

Virus Replication - . what is a virus?. virus : a biological particle composed of nucleic acid and protein intracellular

Learning Target : Virus Anatomy and Physiology - . i can … explain how viruses infect host cells and manipulate the

VIRAL REPLICATION - . viruses replicate in one of two ways: lytic lysogenic. lytic cycle . for each step use the

INVADERS - . chapter 24: viruses. objectives: summarize the discovery of viruses describe why viruses are not considered

INTRODUCTION TO VIRUS - . prepaid by parthpatel(06ce69). introduction of virus. len adleman – give the name