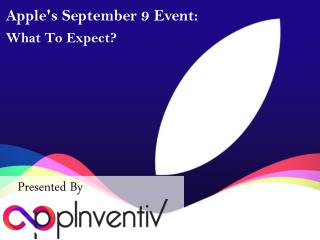 Apple's September 9 Event - What To Expect?

Apple’s annual September event is just round the corner. On September 9, at the Bill Graham Civic Auditorium in San Francisco, California, the company will unveil its next-gen lineup. The company will be live streaming the event on Mac, iPhone, iPad, Apple TV and also for PC users. Apple AAPL -1.00% is expected to announce a release date for its latest mobile operating system at the annual event. Rumors suggest iOS 9 will include a slew of new multi-tasking features for the iPad, such as split-screen apps and a new keyboard.

Apple's September 9 Event - What To Expect? Amazon.com.au - Download mame roms, games and bios files. perhaps to the game's detriment, nioh has a mountain of systems What to Expect on Apple Event September 7th, 2016 - Http://www.coolmuster.com/idevices/apple-event-sep-2016.html apple Contents - . 2000 outlook overview 1999 a brief review a new world or is inflation around the corner? economic

Recycling of Materials by Decomposers - . sara b. (5-1-12) 9 th grade ~ why are decomposers important to an ecosystem?~.