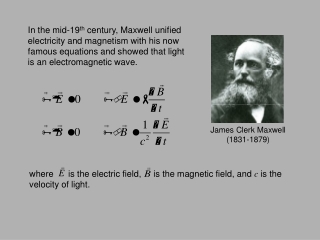 In the mid-19 th century, Maxwell unified electricity and magnetism with his now famous equations and showed that light is an electromagnetic wave. where is the electric field, is the magnetic field, and c is the velocity of light. James Clerk Maxwell (1831-1879).