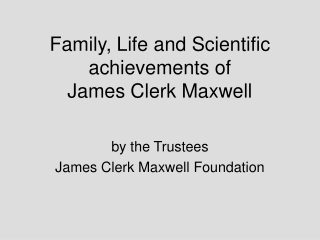 Family, Life and Scientific achievements of James Clerk Maxwell. by the Trustees James Clerk Maxwell Foundation. Who is Maxwell?. He is the most significant physicist of the era between Newton and Einstein!. Deliver this presentation in 4 distinct sections. IMPACT OF THE EUROPEAN UNION ON our DAILY LIFE - . y yote 2014 . achievements of the eu. a single currency. achievements