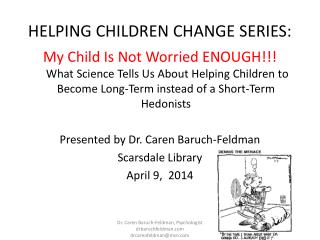 HELPING CHILDREN CHANGE SERIES:. My Child Is Not Worried ENOUGH!!! What Science Tells Us About Helping Children to Become Long-Term instead of a Short-Term Hedonists Presented by Dr. Caren Baruch-Feldman Scarsdale Library April 9, 2014. Do you have a child who…?. STAGES OF CHANGE MODELS - . behavior change is a natural process that involves passing through a series of stages. agenda

Time Series Analysis - . what is time series analysis? the analysis of data organized across units of time. time series

The Developing Child - . ms. brown 133-b. chapter one learning about children. 1-1 beginning your study of children 1-2

Abbreviated Interrupted Time-Series - . what is interrupted time series (its)? rationales designs analysis. what is its?.

Transtheoretical Model (Stages of Change) - . stages of change. principles of change. based on a variety of psychological

Hebrew proverb - . do not confine your children to your own learning, for they were born in another time. international