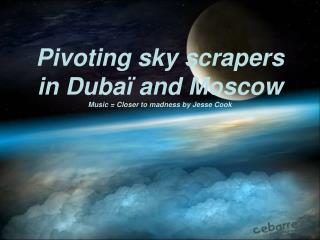 Pivoting sky scrapers in Dubaï and Moscow Music = Closer to madness by Jesse Cook. A sky scraper that pivots on itself. Changes the view as we wish, according to the meteo or sun light. Moscow - . moscow. moscow, the capital of russia, is one of ancient russian cities. it was founded by prince yuri

Cook Virtual Academy Middle School Music Credit - . music - jazz lesson one . jazz is a kind of music that began in

Advent Traditions - . wreath calendar jesse tree barbara branches. isaiah 11:1. 1 a shoot will come up from the stump of

Jesse Lozano Host of “Jesse Lozano in The Morning”, M-F 6am-10am - . jesse lozano launched his radio career in his

Madness: Controlling the Other - . presentation for wide sargasso sea by candice clark. bertha mason . was she really

Jesse James - . the life of jesse james and his banditry by: roger a. bruns. the train. jesse james stopped the glendale

Computer Aided Instruction in Music Education: Friend or Foe? - . presentation and report by: jesse nolan. “the

AEG World Wide - . by: jesse martinez and patricia narez. music. do any of you like music? what kind of music? do you