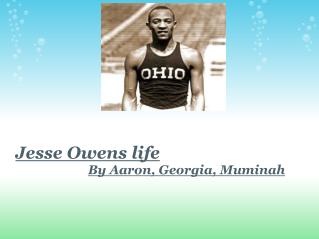 Jesse Owens life By Aaron, Georgia, Muminah. jesse owens dad. When was Jesse Owens born ? . Jesse Owens is a man he was born on the 12th of September 1913, And died on the 31 of March 1980 in Phoenix, arizona  ( by Cancer.) His birthplace was oakville,Alabama U.S.A. Jesse Owens - . by eason wu. growing up. he lived during the time of segregation in america. he had to go to an all-black

Jesse Owens - . african-american track athlete at the 1936 olympics in berlin, he won 4 gold medals for the u.s.

JESSE OWENS - Jesse owen’s childhood why is he famous ? jesse owens the story of his life marriage, comps and death

Jesse Owens - . by dj. introduction. jesse 0wens was a famous runner. he had a sad child hood he started training hard

Jesse Owens - . “ find the good. it’s all around you. find it , showcase it and you’ll start believing in it.”.

Jesse Owens: Against All Odds - . voted greatest track and field star for the first half of the twentieth century 1950 by

By Aaron - Three toed sloth. by aaron. picture from-national geographic society. regions of the world. my animal is a

Jesse owens and the berlin summer olympics of 1936 - . biography. jesse owens was born in alabama in 1913 and grew up in