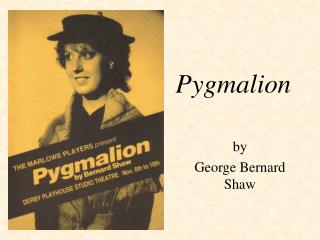 Pygmalion - . kk kayla henry, ronni cassell, and riley smith, olivia schmidt. faraway on the island of syprus, there was

“Pygmalion” - . george bernard shaw. irish playwright plays often commented on some aspect of society, but with a

Pygmalion - . by george bernard shaw. what do these stories have in common?. pretty woman. she’s all that. stewie

Pygmalion Test - . objectives: i will take the pygmalion test in order to demonstrate my knowledge of pygmalion and to

Pygmalion Archetype - . concise definition transformation story in which an external force seeks to change someone else.