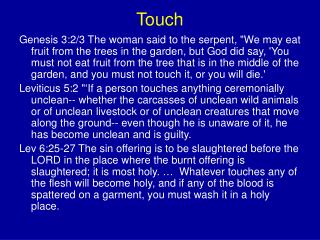 GOOD TOUCH/BAD TOUCH - . how to tell the difference pre-k thru third grade. developed and designed by mary jo sampson,

GOOD TOUCH/BAD TOUCH - . how to tell the difference. developed and designed by mary jo sampson, revised by bisd

Touch - . by: ibrahim allam. what is touch. touch defines boundaries with the environment. the sense of touch is actually

Touch - . nino rawhey. touch . “blindness”. if you ask a blind person what vision is he will not have an answer.

Touch - . why does touch matter?. makes us better communicators vital to our physical and mental health. essential to our

TOUCH - . how touch research can aid design. bruce montgomery june 2010. how can touch aid the design process. are we in

Touch - . by: hayley, jennifer, anton. essential questions. can you explain an example of touch or skin related disorder?

Therapeutic Touch - . kangaroo holding. kangaroo care. developing attachment in the nicu skin to skin contact is the most

iPod Touch - . what is an ipod?. an ipod is a device that holds, photos, music, apps and loads more! we will be using the