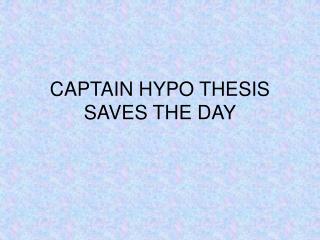 CAPTAIN HYPO THESIS SAVES THE DAY. Captain Thesis was munching on his lettuce sandwich wondering what sandwich he would be getting tomorrow when the phone rang. ‘Hypo here, what do you want?’ ‘I’ll be there in half an hour.’ Jake saves the day - . by: andrew chen. we have to fiet alien land said heron. the scientists have found out that fish

Humpy Nump Saves The Day - . by james. once upon a time there was a stinky cheese man. he did not have a house. so he

Bubbles Try’s To saves the day - . ahhhh!!! stop. ahhhh stop no no. and what do you think your doing mr.?. come on

Qualitative Research Saves the Day for B2B Studies! - Whatu2019s important is understanding which research methodology is

Albinism (Hypo pigmentation) - . by: olivia heel and brandon kenney. medical. albinism is the lack of pigmentation in the

Hypo Testing Jeopardy - . your host: alex jeff gotrocks. hypo testing jeopardy. why this for $100. we need to study this

Hyper-/Hypo-/Isotonic - . tonicity. osmosis. just like other particles, water is free to diffuse in and out of a cell