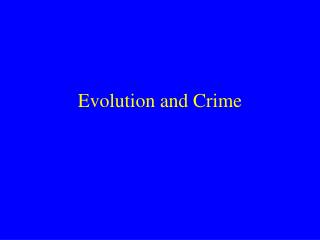 Crime and Cyber-crime - . pieter hartel. crime. acts or missions forbidden by law that can be punished […] , against:

The evolution of Albanian organised crime groups - . what has changed since 1996? jana arsovska catholic university

Crime Waves and Fear of Crime - . class 1. administrative. give quiz remember to check announcements a couple of times

Crime and Punishment - . fyodor m. dostoevsky . thinking about justice. human law and god’s law the effects of sin the

Crime and Fiction - . session one: introduction. agenda. the programme the conventions of crime fiction are common

Crime and Justice - . tuesday, january 21, 2014. review packet due tomorrow…. in order to qualify for a retake on the

Crime and Punishment - . fyodor dostoevsky written in 1865-1866 st. petersburg, russia. the life of dostoevsky. born one

Genes and Crime - Recall that genes play a role in . aggressionimpulsivitynurturingdrug abuseiqantisocial

Gangs and Crime - . the consensus based approach to defining gangs: walter miller. surveyed police and youth workers in

Crime and Criminology - . what is crime? what is deviance?. crime can be defined… . form of normal behavior violation