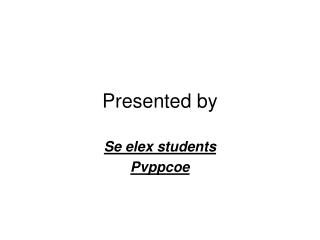 Presented by. Se elex students Pvppcoe. TYPES OF PULSE MODULATION. Pulse Amplitude Modulation. Pulse-amplitude modulation , acronym PAM , is a form of signal modulation where the message information is encoded in the amplitude of a series of signal pulses. Presented by - . in the business of. saving lives. no . 1 killer of children in developed countries. what makes us

Presented by: - Crafting a marketing plan how marketing &amp; finance can team up for greater results. presented by:.

Presented by: - Internet advertising: new ways to make money or promote your brand while not getting sued. presented by:.

PRESENTED BY - . toshiba international: mike tharp hupp electric motors: dave patterson. what are we going to talk about

Presented By: - Health care reform: understanding the law and compliance requirements and assessing what you need to be