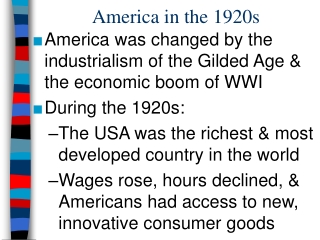 America in the 1920s. America was changed by the industrialism of the Gilded Age & the economic boom of WWI During the 1920s: The USA was the richest & most developed country in the world Wages rose, hours declined, & Americans had access to new, innovative consumer goods. LIFE CULTURE IN AMERICA IN THE 1920S

Who missed out in prosperity in America during the 1920s? - . learning objective – to be able to explain why prosperity

Why was the 1920s a period of prosperity in America? - . learning objective – to be able to explain why the 1920s were

America in the “Roaring 1920s”: Economic Triumph and Cultural Tensions - . join this group?. for christian values

Society in the 1920s - . the “roaring twenties”. women-. shed the ties to their past defined their individuality: use

Economy in the 1920s - . post-war boom. wages went up unemployment went down “big business in america is producing what

Nativism in the 1920s - . brought to you by www.apushreview.com. quick review of nativism. what is it? being hostile to